I would normally be posting my Day 3 recap right now, but this particular recipe has me so incredibly smitten, I'm going to share it with you first.  Yes, it sounds a little odd for a salad, but trust me, it is good. -Kimberly 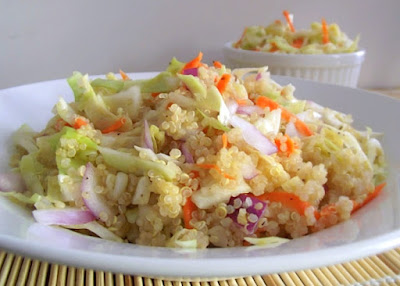 So I've been on this cabbage kick lately, and I place full blame on the fine folks at Wicked 'Wich, our latest Sacramento gourmet food truck.  They specialize in Pittsburg-style sandwiches that come with this amazing no-mayo coleslaw that I can't seem to get enough of.  A tiny bit tangy, a little sweet, it's not the goopy, mayo-y mess that seems to happen to most coleslaws.  I'm so in love it the darned slaw that I think I've become known as the "bucket of slaw" girl whenever I visit.

Anyway, because of this crazy addiction, I've been toying around with different slaw versions at home.  After a few trial runs, I came up with an interesting little hybrid of my own: part 'Wich-style slaw, part curtido (a Salvadorean cabbage slaw that accompanies the national dish of pupusas), this little slaw is more on the tangy side than the Wich's, yet slightly sweeter than the curtido.  It's definitely the best of both worlds. 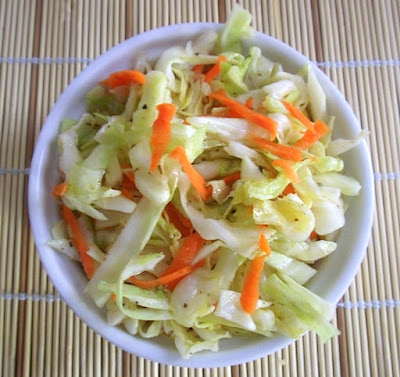 Since I still had a head of cabbage in my fridge, I decided to make my own bucket of slaw for the last few days of my Hunger Challenge week.  Cabbage is a fantastic little vegetable with a ton of hidden health benefits, yet it is beyond cheap, making it perfect for financially lean times.  It may seem boring to some, but once you start playing with it, you'll find it's extremely versatile & tasty.

But a bucket of slaw does not a balanced meal make, so I had to figure out what else to have with it that would be filling but relatively cheap.  Enter my favorite grain in the whole wide world: quinoa.  This tiny little powerhouse of a grain has become quite popular (which I hope is partly my fault!), and for good reason: it's a complete source of protein, good carbs & fiber, and is beyond versatile.

It was, but as its popularity grows, so does its accessibility.  The easier it is to find, the more reasonable the prices have become.  Aside from the usual places like Trader Joe's, Whole Foods, and some large chain markets, even lower cost, bag-your-own-groceries type stores like WinCo are starting to carry quinoa in their bulk sections.  That's probably the best, most affordable way to get quinoa (unless you work at Bob's Red Mill and get a staff discount. In which case, I'm your new best friend).  But we'll discuss that more in depth in the Day 3 recap. 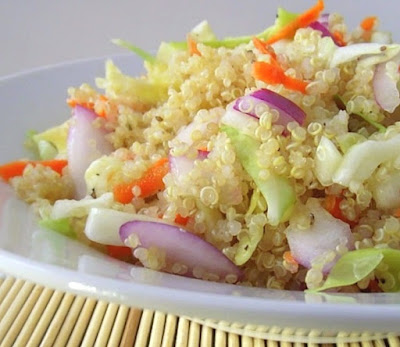 As I was spooning some cooked quinoa into a plastic container, it occurred to me that I could probably just throw the slaw in with it and just call it a salad.  Yeah, cole slaw & quinoa seem like an unlikely - and potentially boring - combination, but a girl's gotta do what a girl's gotta do.

But when I put them together and added a little red onion for extra crunch & color, I was truly amazed at the results!  It's light, yet filling, and filled with all sorts of interesting textures.  Not to mention that it pretty much covers most of my nutrition bases for the day. And it is dirt cheap.  Why hadn't I thought of this before?

So, even if this one seems a little odd, give it a try sometime.  It's a great salad for a work lunch or a light dinner after a long hard day.  It's a wonderful entree, but I'm positive it would be a great side for potlucks or picnics.  Tomorrow I'll post my Day 3 recap so you can keep up on what else I've been eating during this year's Hunger Challenge.  For now, let's check out the recipe!

Directions:
1.  Whisk together the last six ingredients in a small bowl until well combined.  In a separate bowl, toss together the cabbage, carrots and onion, then pour the dressing on top.  Cover and let stand for at least 10 minutes to allow the flavors to incorporate.

2.  Combine the quinoa and the slaw in a large bowl & mix well.  If you like a lot of flavor, pour the rest of the dressing into the salad (don't worry, the quinoa will absorb it almost instantly!).  Otherwise, serve on its own or as a nice meatless side dish, and enjoy!