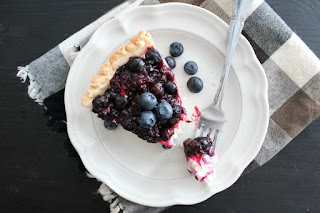 You may recall that last year Facebook foodies were all abuzz about the Pie Party hosted by Shauna of Gluten Free Girl and Garrett of Vanilla Garlic. This was the party that forced me to venture out of my savory cooking comfort zone and finally tackle seemingly frightening things like crust. Well, they're at it again this year, bringing along new friends and inviting everyone and anyone that will play. The rules are simple: Make pie, take picture, post. Easy as... well... pie.

I didn't always think pie was easy to tackle. A nice slice of it on a plate, perhaps accompanied with a giant scoop of ice cream - that's easy enough to handle. It was the pie crust making, with all its little nuances of cold butter here and ice water there; that scared me. It was just way too precise.

I got over it, though, and while I still prefer the easy magic of savory cooking, it did help remove some of that unnecessary anxiety that surrounded my baking things other than muffins. Last year I made wee peach pies for my first official pie-making attempt, and they were a huge success. This year I felt a little more confident, so I decided to try something a little different.

Anytime I'm faced with making pie, I get all sorts of quaint, Norman Rockwell-esque ideas and this time was no different. I had originally set out to make a simple fresh cherry & berry pie with all the cherries my favorite vendors have been throwing at me lately, but then summer arrived. About a week early. With a vengeance! For the past couple years we've had some really mild summers, but this year the traditional triple-digit Sacramento summer came back in full force, and let's just say that 104° weather + upstairs apartment + subpar windows that let in all the heat ≠ an ideal pie-making scenario. 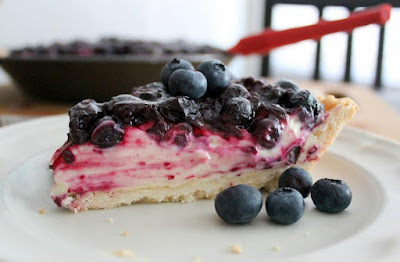 Not wanting to torture myself with more heat from my oven, I had to come up with a new plan. And that plan included the least amount of baking time possible, while still keeping with making my own crust from scratch (not a requirement for the Pie Party, but A) it's better than store bought, and B) I also wasn't about to go buy crust when I could just make it. 'Tis the PGEW way.).

Because my schedule nowadays is all over the place, large chunks of free time are few & far between, so I decided to save making regular pie crust for another day. Playing some mental food math in my head, I figured it would be nice to incorporate a more shortbread cookie-esque crust to go with my berries (narrowed down to blueberries & blackberries, since I had other plans for my strawberries). But that seemed like it could be too dull on its own, so I decided to add an easy but delicious cream cheese filling, on top of which I could spoon all those sweet, luscious berries.

Yo, Poor Girl: Blueberries and blackberries are NOT cheap! Why is this on your blog?

For one, I love pie, and I don't celebrate it nearly enough, so if there's an unofficial holiday for it then I darnit, I'm making pie. But I also chose this to showcase the beauty - and affordability - of eating seasonally. It should come as no surprise to anyone that fruits & vegetables that are enjoyed in season are far more delicious than those that were picked eons ago and left to "ripen" in some warehouse. With that awesome quality comes the added bonus of lower prices. Because there's no need to incur storage or transportation costs for produce that is not in season, there's no need to pass on all those extra costs to you, the paying customer.

Granted, there are many places where certain fruits & vegetables aren't available, or if they are, it's only for a very small window of time. And there are places where even seasonal produce can cost a lot, just depending on where one is located. So believe me when I say I understand if you can't trot on down to your local farmers' market like I do, grab a bunch of cheap & sexy (oh, that sounded bad) produce and go about your merry way. But eating seasonally is good to keep in mind, regardless of how limited your store selection is. Even at major chain grocery stores, you will notice a difference in both quality and price when it comes to certain items. 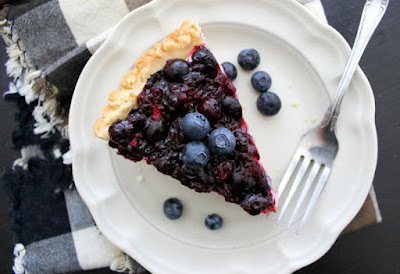 So what if your boyfriend loves blueberries and you want to make this for his birthday, but he has the nerve to celebrate his entrance into this world in December, when there are just no blueberries left? No problem. These things happen. You can get around this in one of two ways: try to stock up on summertime berries and freeze them so you'll be able to use them throughout the year (the best way to solve your dilemma), or B) buy frozen berries (not as awesome, but they'll get the job done).

Again, eating seasonally is best, but I personally don't feel the need to deny myself something like blueberry pie just because it's wintertime (watch me get slammed for that one; but really, it's not the end of the world to eat something out of season. Unless it's a fresh tomato. Those things are sacred.). Don't stress; this is pie and it's supposed to be fun.

And hey, guess what? You're still allowed to have fun even if you're broke. Just do so in moderation (as most things should be done). This isn't an everyday thing, and you're certainly not going to sit down and eat this entire thing in one sitting. Just save this sort of thing for a special occasion or for when you already have most (if not all) of the ingredients on hand. Running out and buying stuff for a recipe, especially when you're having a rough time financially, is not necessary. If you're really set on making a certain recipe, try to see where you can make substitutions with ingredients you already have on hand. This way, you won't be spending too much extra just for one dish.

Speaking of costs, not sure you can afford to make this entire pie? Most of the time, I can't either! But again, this is not an "everyday" recipe and we can still solve this problem a couple different ways. You can cut the recipe in half and use smaller pie dishes to make something a little more user & pocket friendly, or you could make mini pies in muffin tins. Either way, you can really stretch out your ingredients so you can make the best use of them. If all else fails, ditch the crust and make dessert shots! The cream cheese and blueberry fillings make a super simple parfait that you can use in shot glasses or small juice glasses, and make a lovely summertime treat.

Okay, no more babbling. It's time for PIE!!!

I wrote this recipe according to the 9" pie I made for the Pie Party, but please feel free to adjust it to fit your needs. If you have smaller pie pans, you can divvy up the crust & fillings among those. You can also cut the recipe in half and make one smaller pie and a few dessert shots. Because each element of the pie stands on its own quite well, it's easy to adjust the amounts you use for your finished product according to your budgetary and equipment needs.

Directions
1. Preheat the oven to 350°. In a small bowl, mix together the flour & baking powder. In a separate, larger bowl, cream the butter & sugar until light & fluffy. Add the flour a couple tablespoons at a time, and mix until thoroughly incorporated, taking care not to overwork the dough. Carefully press the dough into a 9" pie plate or pan (this will take some effort as this isn't a "rolling" kind of dough; just be patient and make sure all sides are covered evenly). Poke a few shallow holes at the bottom of the crust with a fork, then place in the oven and bake for 10-15 minutes, until the edges are a light golden brown. Remove from oven and set aside to cool on a rack.

2.Prepare the cream cheese filling by whipping the cream cheese with an electric mixer until light & fluffy. Add the condensed milk and mix until silky smooth, about 2 minutes (on a medium speed setting). Finally, add the lemon juice. Mix for another 20-30 seconds, until the mixture starts to gel a bit.

3. Prepare the blueberry filling: Combine the cornstarch & lemon juice in a small bowl and mix well to create a quick slurry. In a medium saucepan, combine the berries, sugar and cook over medium heat for a couple of minutes, until the berries start to release their juices and break down slightly. Add the lemon juice-cornstarch slurry and bring to a boil. Reduce heat and simmer for another minute or so, until the berry mixture starts to thicken. Remove from heat and set aside in a bowl to cool completely.

4. By this time, your crust should be cool enough to start assembling your pie. Pour the cream cheese filling into the pie crust. Tap the dish a couple times to make sure the mixture settles evenly and smooth the top with a spatula. Cover with plastic wrap and refrigerate for at least 30 minutes.

5. Remove pie from fridge and carefully spoon the cooled berry mixture onto the pie. Using a spatula, gently distribute the berry mixture over the pie, taking care not to squish the berries into the cream cheese filling (we're making layers here). Cover and refrigerate for another 30-60 minutes, or until ready to serve. Garnish with extra fresh blueberries, and enjoy!