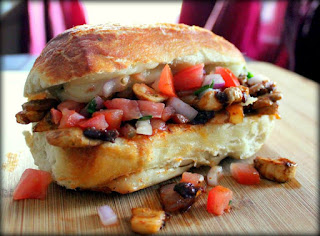 Granted, when the dust has settled and I actually have a couch to lounge on again, it will be a wonderful move. It's just that this was one more curve ball life threw my way that I could have done without.

In my last post, I mentioned that I had a bunch of updates for you, and I do. I just didn't like where my original post was going, because it was beyond depressing. Mind you, a lot of what I've been dealing with over these past couple of months has been beyond depressing, but still... I don't want to drag everyone else down, and rehashing the bad only makes me continue to feel funky.

So, to catch everyone up to this point, here's the Cliff's Notes edition of what I've been dealing with these past couple of months:

My health continues to suffer, and I just got over the longest, most intense PHN/shingles flare ups since I was diagnosed with this lovely disease two years ago (already?!) it lasted 6 weeks; my father, who is in early renal failure due to complications from diabetes, was hospitalized for a long time due to a serious bout of pneumonia and he almost died; my mother's health is taking a turn for the worst again, even after her successful surgery last summer; I lost my sweet little girl cat, Hana Leigh, to a 3-month battle with her own diabetic complications, including hind leg paralysis which involved a lot of nursing (she died in my arms early one morning... seriously THE most intense, heart-wrenching things I will ever experience); and the eviction I've been fighting so hard to avoid these past two incredibly hard years, almost became a reality. But I do need to move because I will never get out of this financial hell with the overblown rent I struggle to pay here. The good news is that I'll be going somewhere I can feel a lot less stress, and which will hopefully have no negative impact on my health like this place does. (That's a WHOLE other blog post, though.)

In short, it's been a very, very dark time.

Which is part of why I enjoy bright, happy-looking food. 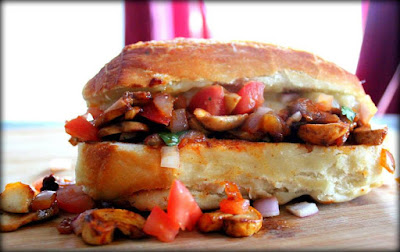 Fortunately, the one bright spot has been my job. I still have one, which is awesome in this still-flailing job market, and while it's one of the most challenging jobs I've had in years, I absofrigginlutely love it. In a slightly masochistic way, lol. Maybe it's because I grew up with parents in the restaurant business, as well as my own personal restaurant experience. It's hard work, has taken over 75% of my dreams since I started, and really keeps me on my toes. It suits me though, and I'm learning a lot about a side of the restaurant business I never expected I would enjoy so much, but again, that's a whole other post. I'm also surrounded by some of the most amazing culinary talent in Sacramento, so it's great to be next to so much creativity and drive.

During those uber-crappy months of January, February and most of March, I was stuck in survival cooking mode. Like I mentioned in my last post, that was a very bad idea, and I'm still trying to make amends with myself for stifling my creative side for so long. And while a lot of what I've been making lately has been quite simple, it's been fun letting my mind go for a while, using my cooking as a way to escape all the difficult things I've had to deal with recently.

This is one of those recipes. Actually, I take that back. This is one I'd developed a few months ago, right before all the proverbial shit hit the fan, so it got pushed aside. But it was one I thought about almost daily, picturing how it would look once plated, imagining how the flavors & textures would dance across my taste buds.

Turns out it's also a real case of better late than never, because HOLY HANNAH! this is SO my new favorite vegetarian sandwich. (Sorry, Apple, Kale & Cheddar Melt! I still love you, though...)

It's super simple to make, and if you're a fan of spicy foods like I am, it's another way to get your heat on without resorting to the usual fare. Filled with plenty of meaty mushrooms, melty cheese, and fresh, chunky pico de gallo, this sandwich is a total party in your mouth. It's is such a hearty sandwich, even some meat-lovers will find this one equally satisfying as a meat-centric sub. And don't worry about this being too spicy - the cool salsa really helps tone down the spicy hot mushrooms.

Just a couple of things to note for this one: feel free to use your favorite bread rolls for this sub-style sandwich. I'm in a Dutch crunch phase right now so that's what I used for mine, but almost any sandwich roll should do. I'd probably stay away from the sourdough since it could compete with the flavor of the mushrooms, but otherwise you're good to go. And if you want to go the burrito or taco route instead, just spoon the filling into some tortillas, add pico de gallo and start chowing down. 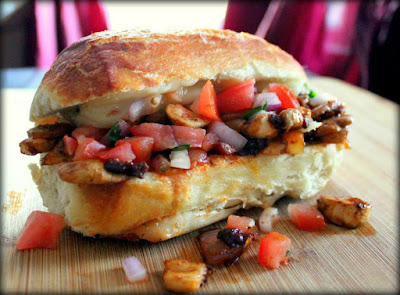 Can't handle the heat of the actual pepper with your sandwich? Feel free to sub 1-2 teaspoons of the adobo sauce and you'll be fine. No access to chipotles in adobo at your store? Feel free to use about 1/2 teaspoon of ground chipotle pepper instead.

Directions:
1. Prepare the Pico de Gallo and set aside in the fridge while preparing the mushrooms. Heat the oil in a medium skillet and add the onions. Cook until fragrant, then add the mushrooms, paprika, salt & pepper.

2. Saute the mushrooms over medium heat until they soften and start to release their moisture. Add the chipotle pepper and its adobo and cook for another 2-3 minutes, until the mushrooms are tender and a sauce has been created. Remove from heat and set aside.

3. Split the sandwich roll and sprinkle both sides with cheese. Place under broiler until cheese is melted, then add a generous spoonful of mushrooms. Top with plenty of pico de gallo, serve with a cool, crisp salad (or maybe just a cool, crisp beer if you like that sort of thing), and enjoy!
No comments: