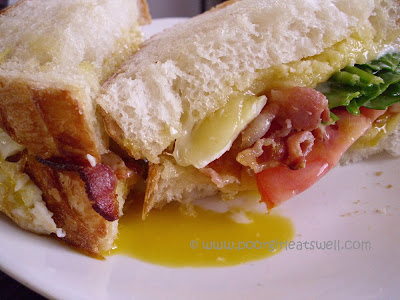 You all know that movie, Spanglish, right? Came out a few years ago, with Adam Sandler, the impossibly (and unfairly) gorgeous Paz Vega, and that sandwich? Seriously... as charming and funny as the movie is, the real star of the show (in my opinion) is Thomas Keller's sandwich, appropriately named "The World's Greatest Sandwich". It only has about a 25 second cameo in the film but it's all I can think about, even 5 days after returning the video to Netflix. Such was the all-consuming desire to partake of this deliciousness that I did the unforgivable: I ate bacon, a food I know most people adore but from which I try to distance myself as much as possible because there's just nothing good for you in there at all ('cept for the delicious flavor).

Now, most of you PGEW veterans know that 98% of my recipe posts are creations made by yours truly. The other 2% is divvied up between stuff my mom & dad have made and stuff that I've obsessed over from certain restaurants. What can I say, I like making up my own stuff. But there are just certain dishes that MUST be recreated and this sandwich is certainly one of them. Of course, I made some adjustments to suit my personal tastes and budget, but it's still fab. The first time I made this was a revolution for me because I actually got the "ooze" right; unfortunately, I was so enthralled with the idea of eating the darned thing that I forgot to take a picture. Then I couldn't seem to get the timing right in terms of having the cheese be all melty-gooey and the egg yolk perfectly saucy. Today, in honor of the fact that I am one of 5 people in the United States who will NOT be hosting or attending a Superbowl party, I set out to make this thing right AND good looking, once & for all.

The best part of this sandwich? It really does fit the Poor Girl style of cooking, in that it utilizes a lot of what would be found in my - and most folks' - fridges and the fact that there's nothing overly fancy ingredient-wise, cutting down on the cost. The only things I didn't have to make this exactly like Thomas Keller would do, were butter lettuce and true Pain de Campagne. But I'm never without baby spinach (at least, I try not to be) and I still had about half a loaf of good sourdough, so I was able to make due with what I had. I even had Monterey Jack cheese AND bacon, which doesn't always happen (the first couple times I made this I used cheddar and ham it was still divine). Courtesy of the Foodbuzz Tastemaker Program, I had some Eggland's Best Eggs to make things even more scrumptious, and since I'm not the biggest mayo fan (unless I make my own and I wasn't feelin' up to it), I just doubled up on the cheese, tee hee. Still, it just goes to show that even the most famous chefs will use the most basic ingredients they have to make amazing foods, just like yours truly likes to do. Let's check this one out.

2 slices of pain de campagne (or a good quality crusty mild sourdough)
3-4 slices of bacon
3 slices of tomato
1/2 c shredded Monterey Jack cheese
6-7 leaves of baby spinach (or 2-3 small leaves of butter lettuce)
1 large egg
Cooking spray (or butter if you really have to have it, but isn't this sandwich sinful enough without it?)

Prepare the broiler. In a medium fry pan cook the bacon until crisp and drain completely on a plate lined with paper towels. Set aside. Place equal amounts of cheese on each slice of bread and place under the broiler until the cheese is melted & slightly bubbly. While that's broiling, spray a small pan with cooking spray and cook the egg until the yolk is slightly set but not completely cooked through (remember, this needs to "ooze" like a sauce at the end).

Remove the cheesy bread from the broiler and assemble the sandwich by layering the bacon strips, tomato slices and greens on one of the slices of bread. Slide the fried egg onto the other half, put the two together and cut the sandwich in half, allowing the egg yolk to ooze out and create a simple sauce. Grab plenty of napkins, pour yourself a beer like Adam Sandler (or wine, as Poor Girl prefers) and enjoy!