Hunger Challenge Days 4 & 5 and a recipe!

As a Virgo it pains me not to compartmentalize these last two days into individual posts; it’s in my obsessively organizational nature to put everything into sections, boxes, compartments. Alas, Day 4 was so uneventful that it didn’t really warrant its own post, so rather than bore you, I thought I’d just do a grand finale post. 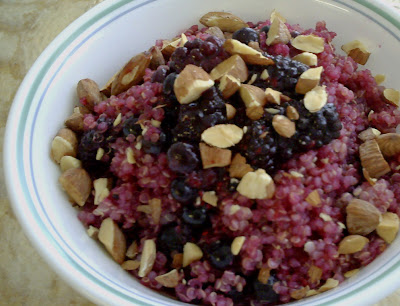 Day 4: As I said before, it was rather uneventful. With the new choir season starting this week, as well as the wonderful blogging event I was invited to be a panelist for by the Sacramento Press, not to mention one of “those” weeks at work, I’ve been a very busy little bee. Fortunately (and because of my master planning skills), I had plenty of leftovers, so I was good to go. I started the day off with another Scrambled Egg & Tomato Sandwich, followed by a lunch of leftover Curried Garbanzo Beans with rice. Though the spread at the Sac Press blogging event looked fabulous, I was a good girl and waited to have dinner afterwards, which was a nice plateful of the Seitan Stir-fry with Quinoa. A buffet of leftovers, my day’s total came to about $2.75. Not bad, not bad at all. The only thing worthy of remarking is the discomfort of hunger. Don’t get me wrong, it’s not like this is the first time I’ve felt it; but except for those moments when I was trying to remain painfully thin (around a size 2/4), I have not felt hunger this badly. In fact, I haven’t felt it this badly since I started PGEW (which proves I eat well, lol), and with the whole hypoglycemic thing, it’s been more uncomfortable than I remember. Still, I was able to remain alert enough to not answer questions stupidly on the blogger panel! That’s good enough for me.


I never thought I would be looking forward to the end of this. The hunger had finally become a constant, but it was not something I could ignore. Because of my regular frugal habits the hunger challenge was probably easier for me than for most folks, but it was still very hard. I wanted to make sure to stick it out until the bitter end, though (which technically isn’t until today, but I chose the workweek approach to my hunger challenge), and I did. For breakfast I continued to use my never-ending pot of quinoa and made a breakfast bowl with some mixed berries and almonds. Not only was it beautiful to look at, it was really tasty and filling. I think I will just add some sort of spice like nutmeg next time I make it, just to kick things up a bit. The total for the whole bowl came out to about $0.85; a very good start to the day.

When I looked to see what I had left in my fridge, I noticed there was still a bit of hummus left in the last little tub I’d bought, so I was all excited to make an H.S.A.T. Then I realized I didn’t have spinach or avocado, nor could I afford to buy them, so I improvised and made a hummus, lettuce, and tomato sandwich instead (and H.L.T.). Not quite the same as the best sandwich ever, but still very yummy. I had it with about half of my yogurt cup, so lunch came to around $1. For dinner, I made things really easy for myself and just had the rest of Day 4’s dinner, the Veggie & Seitan Stir-fry with Quinoa. I went all out and had some pomegranate-berry yogurt with mixed berries for dessert, so the evening meal came out to $1.65. Grand total for the day: $3.50. Way to go, me! I actually made it through the whole week. :)


I wanted to thank all of you for supporting me this week. It was harder than I thought, though obviously not impossible to do, as there are thousands that live this way day in, day out. Thankfully, everything I’ve preached about for the past year helped me survive this week without having to resort to having a couple of carrot sticks every couple of hours. Hopefully this exercise has opened your eyes and mind about hunger as much as it has mine. One thing is eating on a very small budget because that’s all I have; another is having to live like so many people who go to bed feeling those uncomfortable pangs of hunger because there’s just no other choice. I highly recommend doing this even if it isn’t during the Hunger Awareness month of September. It’s a wonderful way to put things into perspective for yourself and to really reassess your daily spending habits. That’s not to say that you shouldn’t enjoy the things that you can afford to get; by all means, enjoy it! You earned it. It’s just good to remember that we should be extremely grateful for what we do have, never forgetting that there are others out there who somehow find joy with so much less, people that we can help by being conscious of not wasting valuable food and keeping local food banks well-stocked for the people who need their services.

Melt the butter in a small saucepan. Add the berries, sugar and lemon juice, and cook over medium low heat, until the berries begin to soften and a light syrup is created with their juices & the sugar. Add the quinoa and cook until heated through. Serve in a large bowl with plenty of chopped almonds on top, and enjoy!