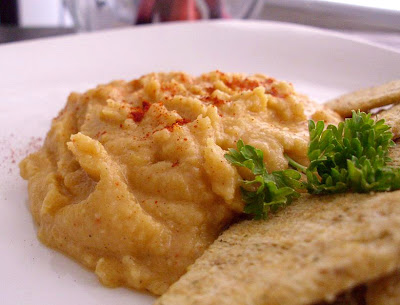 Remember when I posted the French Green Lentil & Israeli Cous Cous Salad recipe last month and I mentioned there were some red lentils I ended up using in something else? Well, they eventually became a very quick and easy type of hummus. This is their story.

They were supposed to go into that salad, actually. My vision was to create a dish of tasty food confetti made with red & green lentils and pearl-shaped Israeli cous cous. However, I was in a rush and when you rush, you tend to lose a little bit of focus. Because I was rushing, I forgot that red lentils are far more delicate than green lentils, so they ended up slightly overcooked and had split in half. This would not have worked well for the salad, so I omitted them from that recipe. But I didn't want to waste the poor lentils either! It wasn't their fault their cook was trying to work on two recipes at once before heading to work (I'm dedicated, yo). As I hurriedly covered them and stuck them in the fridge before rushing out the door, I thought to myself, "Hummus. They will become hummus."

Traditional hummus is usually made primarily of garbanzo beans and tahini, with lemon juice and spices added according to one's personal taste. Like with many of "hip" foods du jour, several new hummus variations have cropped up, from spicy to sundried tomato, edamame to black bean. The one ingredient that's usually featured (aside from the obvious legumes) is, of course, the tahini. But what if you want to make your own hummus but can't find or afford the tahini? What if one is allergic to sesame seeds and just can't have the tahini without some serious consequences? Should one be left with nothing but visions of hummus dancing in one's head? Of course not! You just make the hummus sans tahini. Plain & simple.

Naturally, the flavor will be a bit different from traditional hummus because this is made with red lentils as opposed to garbanzos and no tahini. But with the use of aromatic spices like cumin & paprika, plenty of spicy cayenne and a generous drizzle of olive oil, this hummus is still rich & flavorful and will have a similar texture to traditional hummus. This can certainly be used as a spread on sandwiches like the H.S.A.T., on pizzas like my Roasted Eggplant & Hummus Pizza, or just by itself with some crackers or pita bread. Making your own hummus at home is also slightly more economical than buying it at the store. Most 8 oz. tubs of hummus will run anywhere from $3-5 (unless you’re at Trader Joe’s where it’s still pretty inexpensive). If using garbanzos when you make your own at home, you can save up to $2.75 on 8 oz., and if using lentils you can save about $1.50 for 8 oz. This can really add up after awhile, especially if you're a big hummus eater like I am. And now for the quick and simple recipe.

Bring the water to a rolling boil, reduce heat to medium and add the lentils. (NOTE: Do NOT salt at this point, as this will only toughen the lentils.) Cook for about 15-20 minutes, or until the lentils have split; they will look mushy at this point. Place the cooked lentils in a fine mesh colander and place them under cool running water to stop the cooking process. When they have cooled, allow them to drain completely.

Using a food processor or a hand blender & bowl, combine the lentils with the olive oil, lemon juice, spices & salt, and puree until smooth. Check for flavors and adjust according to your personal taste (I like my hummus rather lemony & garlicky, while others may prefer a smoother flavor). Use as a sandwich spread, as a base for a Mediterranean style pizza, or serve with crackers or pita bread triangles. Either way, enjoy!