My next guest post comes from my awesome friend, Andrew, of Eating Rules, an amazing blog that focuses on healthy eating by following three simple rules.  Whether he's challenging you to avoid processed foods or encouraging you to look closely at food labels so that you're making the most nutritious choices possible, Andrew makes you think about what you're putting into your body (something which a lot of us don't do often enough).  The best part is that he does it in a truly approachable, positive way, without that hefty serving of guilt that some writers serve with their health lessons.

For this post, he's created a fabulous, basic recipe, that also helps me cover another one of the topics I keep meaning to get to here on PGEW: making homemade stock.  I've referred to my homemade veggie, chicken, and turkey stocks in the past, but have yet to get them up on the blog.  And I'm kind of glad now, since Andrew's veggie stock looks so much better than mine!  Let's check out this great recipe that helps make the most of any extra produce you may have.

I'm honored and very excited to be writing a guest post for Kimberly today!  We first met last August at the International Food Blogger Conference. Just before I left town, my friend Kara, a die-hard PGEW reader, told me that I simply HAD to seek out Kimberly. I shrugged, and told her, "Sure, no problem."

So I flew to Seattle, and that afternoon, while waiting in line for registration, started introducing myself to the folks nearby. Sure enough, Kimberly was standing right next to me!  As soon as I learned who she was, I blurted out, "Oh!  My friend Kara says 'Hi!'" Clearly I was a total fan dork -- by association, no less.  Even so, within minutes, Kimberly and I had become great friends, and the rest is, well, food blogger history.

On my own blog, Eating Rules, I seek out ways to balance healthful with delicious. This simple, base recipe is one of those that hits the trifecta: Good, healthy, and cheap!

Since this stock uses vegetable scraps and trimmings -- and I'm pretty liberal in what I'm willing to throw in the pot -- I wouldn't necessarily ladle it into a bowl and serve it to my dinner guests.  However, it's terrific in place of water when cooking whole grains (a few of PGEW's Quinoa Recipes come to mind) or as a base for other soups and other dishes. It's easiest if you freeze it in pre-measured amounts, so you can simply melt it in a pot and start cooking with it in the same step.

Vegetable Scrap Stock (makes about 3 quarts, cost per quart about $0.01) 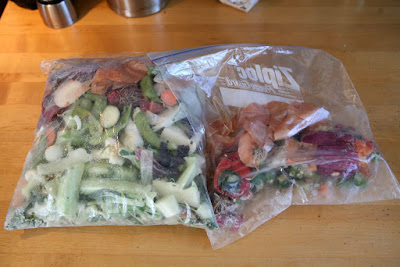 I keep a one-gallon-size zip-top bag in my freezer, and add my vegetable trimmings anytime I cook.  Once the bag is full -- which happens surprisingly quickly -- it's time to make stock!

Also, if I find veggies in my fridge that are "on their way out" but not actually spoiled yet, I may toss it into the freezer bag if it would end up going to waste otherwise.

Other good scraps to include -- but will impart more specific flavors, so be careful -- include:  Asparagus, parsnips, squash, fennel, corn cobs, pea pods, and cilantro.

Scraps to avoid:  Turnips, cabbages, brussels sprouts (these all get bitter), and anything already rotting that you wouldn't eat otherwise. 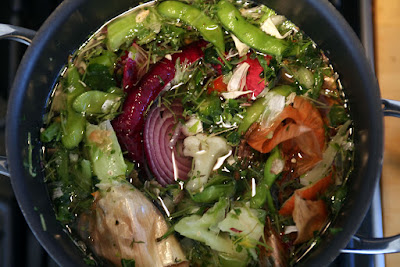 Fill a large pot halfway with water, about 3-4 quarts, and bring to a boil.  Drop in all the vegetable scraps and bring back to boiling. 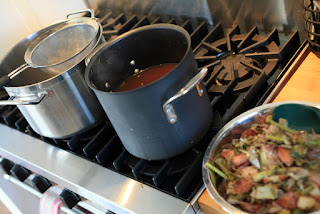 Once the pot returns to boiling, you may want to add some seasonings.  Good options include thyme, basil, and a bay leaf or two. I also add one or two teaspoons of kosher salt (remember, though -- it's easier to add more salt later than to take out too much!) 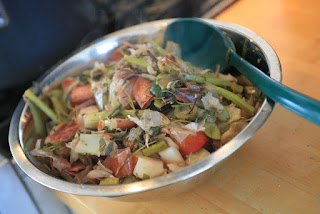 Allow to cool for a few minutes. Carefully scoop out the larger vegetable scraps with a slotted spoon, placing in a large bowl so they can cool.  Next, take a fine-meshed strainer or colander lined with cheesecloth, and carefully pour the remaining broth through the strainer into another pot. 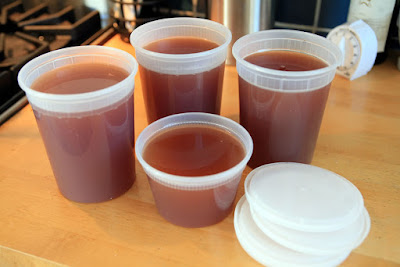 Let everything cool to room temperature, which will take an hour or two. Give the broth a taste and add any additional salt or seasonings as desired.

Discard the vegetable scraps (compost, anyone?).  Then measure out the stock in 2- or 4-cup increments, and freeze in individual containers, being sure to leave a little bit of headroom for it to expand when it freezes.

If you're intrigued by making your own stocks, you might also want to check out Deborah Madison's Vegetarian Cooking for Everyone, which has a great primer on stocks and soup recipes.

Thanks so much, Andrew!  I absolutely love this recipe and will definitely be adding this to my broth & stock recipes.

Hope you all enjoyed this post!  Be sure to check out Andrew's blog, Eating Rules, and stay tuned for another guest post in the next few days!  In the meantime, it's time to get back to more moving & cleaning.  Can't wait to start sharing new recipes from my new kitchen!  :)