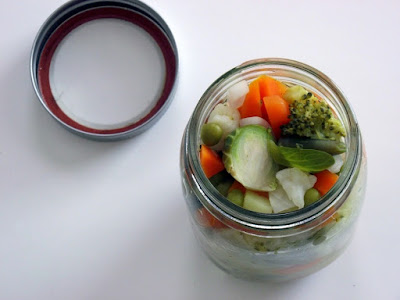 Earlier this month, food bloggers and non-bloggers alike were invited to the first ever internet Pie Party, a celebration of all things pie hosted by Shauna of Gluten Free Girl and Garrett of Vanilla Garlic.  Hundreds of people, from accomplished baker to novice pie maker (like myself), joined together and posted their favorite pies on Facebook, Twitter and beyond.

This time around, we've been called to party together in a different way.  Our assignment: pickling.  That's right - for our August "party", food enthusiasts have been asked to pickle things.  Not just cucumbers, which is the first thing most of us think of when we think of pickling.  We have been told to go on & pickle away to our hearts' content.  Nothing is off limits: vegetables, fruits, eggs... if it can be pickled, we've been called to do it. 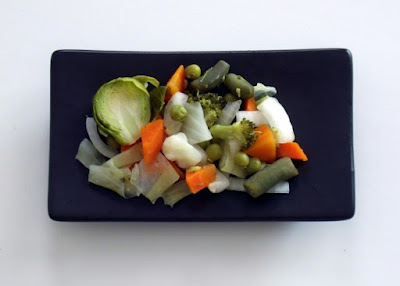 At first I felt a little lost with this one.  Sure, pickling is one of the most common ways of preserving & enjoying certain foods, and it seems like a fairly simple task if you know what you're doing.  But I'd never actually done any of this on my own.  Or had I?  When I thought about it a little more, I realized that there were plenty of things I'd pickled in the past, so I got to work on one of my two favorite pickling recipes.

After soliciting some help from my mom who was visiting me this weekend, we set about making encurtido, a very simple, yet beyond flavorful recipe for Colombian style pickled vegetables.  Not to be confused with curtido, a traditional Salvadorean pickled cabbage slaw that is commonly served with pupusas, encurtido is something I've enjoyed since my childhood.  One of my favorite non-guilty "guilty" pleasures, I love to eat this over a bit of brown rice for a simple summer dinner.  It's healthy & light, but so incredibly tasty there's no way one could ever feel "cheated" eating this stuff. 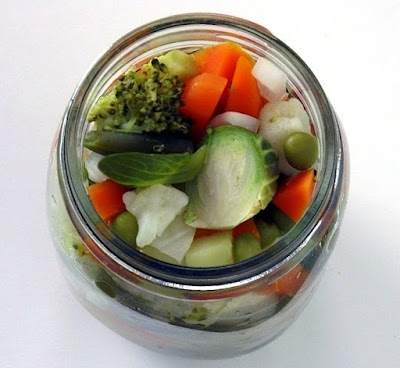 The other thing I love about encurtido is that it's a delicious way for almost anyone to enjoy vegetables.  And I mean those who aren't always able to have access to the fresh stuff.  Too many folks across the country are living in food deserts where fresh produce is almost never available.  Pickling is a great way to preserve the veggies so they will last a bit longer for those who can't access fresh produce on a regular basis.  It also doesn't require that the ingredients used be fresh from the produce section.  In fact, we usually make this using frozen bagged vegetables, which is the next best thing to the fresh stuff and much easier to find in areas that don't have full service grocery stores or farmers markets.

While the vegetables I've listed are the ones that we usually use, you're more than welcome to use your favorite veggies to make this your own.  I have it on good authority from the master encurtido maker herself (me mum) that you want to stick to sturdier vegetables like carrots, cauliflower and the like, so that they keep their texture & form better the longer they pickle.  Other than that, there's not much to note on this one except that you can serve it on just about anything.  Use it as a side, as a base for salads, or tapas style for a nice summer dinner party.  Let's check out the recipe.

Directions:
1.  Bring the 6 cups of water and 1 tablespoon of salt to a rolling boil.  Working in separate batches, blanche all the frozen veggies and the cabbage for about 1 minute apiece.  Then blanche the Brussels sprouts for about 90 seconds.  (NOTE: Do not blanche the onions.)   After each batch, immediately plunge the blanched veggies into cold water to stop the cooking process, then place in a large bowl with the onions.

2.  In a separate small bowl, combine the remaining water, vinegar, cumin & salt, and whisk together.  Pour the mixture over the vegetables and toss until everything is completely combined.

3.  Place the encurtido in glass jars and refrigerate for at least 4 hours to allow the vegetables to begin the pickling process.  Serve over rice, as a side for meats or as a zesty salad topper, and enjoy!